The Town Council, volunteers and the Parochial Church Council (PCC) have been working on this possibility for over two years now. Differing parties have led at different stages to choose an architect, in working through various plans and agreements which moved from Framlingham Town Council (FTC) being responsible and leasing the land;, through to the PCC taking responsibility with assistance from East Suffolk Council and in partnership with FTC. All parties believed we were working with a fairly secure budget of £840k to cover the whole build and new equipment and this figure became the basis for the agreements between the parties.

Since the exhibition of the plans in January 2020 the PCC has been working hard with the architects, structural engineer, quantity surveyor and other experts. We had been hopeful that a Planning Application would be made in April. However a number of serious and costly issues have arisen:

Because of topography, possible archaeology and tree protection the foundation and groundwork costings became considerably more expensive than had been budgeted for.

Additional professional fees for the above issues were necessary and for investigating the Mechanical and Electrical engineering aspects. These included environmental concerns including 1 or more Electric Vehicle Charging Points now required by the County Council.

The initial contingency provision was substantially less than would normally be built in to initial costings.

The car parking surface will be more expensive in order to protect the trees.

It became clear that the architect’s view that £840,000 would be sufficient needed to be fully tested before a Planning Application was made.

In April the PCC received the first total build and furnishings cost of £1.36m covering the whole build and new furnishings – an increase of 62% which was not forecast. We were advised by the Architect and Quantity Surveyor that it might be possible to reduce the costs by reviewing all areas, reducing the size of the total building and simplifying the specification. The PCC asked them to proceed with this.

A new plan – Option 3 – is attached which shows a simpler building with a hall that accommodates up to 112 seated (previously 120), a meeting room with space for 16 seated around a table (previously 20), smaller office, the kitchen and downstairs store are about the same size. The heating would be by gas boiler and radiators. The specification now includes treated softwood weather boarding rather than Rheinzink wall cladding.

On 29th May we found out this has reduced the total to £1.067m. The work on car parking surfaces, renewing tables and chairs would all have to be delayed and come out of the income of the new hall when they would be deemed as new work to an existing build and so VAT would have to be paid on these works.

The PCC finds itself in a very difficult position. It was making steady progress towards the £70,000 funding to match the Town Council Grant. But finding new sources of generous external grants is increasingly difficult. Covid 19 rightly means that many large funders are now concentrating on funding projects directly linked to the pandemic. Accordingly a building which is trying to encourage community growth and interaction may not be a priority for grants in the next few years. Another effect of the pandemic is that the PCCs income is at present down by about 50%. The PCC will not have access to central Church funding as this will be focussed on supporting congregations through the cash shortages.

The PCC has been considering its next steps. There does not seem to be any significant scope to reduce the size or specification of the building further without prejudicing the very purposes for which it is aimed or affecting the ability to gain planning permission.

The PCC is willing to consider increasing its fund raising contribution. Realistically the PCC knows it would be unable on its own to raise the full £230,000 over its existing commitment to meet the new target of £1.07m. However willing it has limited resources, the current funding climate and its other charitable purposes all affect its ability. Alternatively launching a large appeal would delay any building and lead to increased costs again.

Members of the PCC are meeting with Town Councillors and a District Councillor to discuss what has happened and what possibilities there are.

The organisers are very grateful to everyone who came and especially to those who shared responses. Around 150 people came over the two sessions and there was a good buzz with helpful questions and answers about the design and the possibilities. We have had 76 written responses on the comment forms and there are some still being returned as people see the plans which are now displayed in the Church.

There were a lot of compliments about the design. 58 people (76%) were, without reservation, in favour of the proposals. 12 (16%) were not opposed but had a query about one issue, & a further 5 (7%) queried two issues. There was one person out of the 76 who was not in favour ofthe proposals. We are happy to receive further comments and any ideas which people have.

The biggest concern expressed is about car parking and we understand the importance of this. The County Council’s requirements for a hall this size is for 13 car spaces, 3 blue badge spaces, 2 motorcycle spaces and at least one bike rack. We are now working on how to optimise and manage hall parking and we will be having further conversations with the Town Council about the overall parking situation in the Town & will keep people informed.

3 people (4%) would like a bigger hall. The limitation of space on the site, the priority given to two rooms, with the need to preserve access to St Michael’s Close and the availability of parking are all factors in the design solutions. This will be looked at again with the architects.

Sound management (4%) in the hall and for residents around have been concerns from the beginning and continue to be so. More information will follow as the designs progress.

There was good discussion about the colour of the cladding during the exhibition with some people seeing how it met the design objective and some feeling that the colour displayed was too dark. 3 people mentioned the darkness as an issue on the comments form. This will be discussed with the architects in finalising the design and the planning application.

2 people wondered whether the kitchen is big enough. We have tried to balance the space necessary for the kitchen and the need for ground floor storage. We have tested the size out with some users who thought it would be appropriate. We will continue to consider the size of the kitchen as we work towards the planning application.

We are working hard with Haydens, a company of ArboriculturalConsultants who are advising us on tree health and needs. We will work with District and Town Council officers to find the best mix of protecting roots & replacing trees already diseased. More work will be done during the Spring and Summer. Environmental issues are important to us and were mentioned. We are seeking further professional advice.

During February there will be conversations with the architects, structural engineer and Quantity Surveyor working on the project and we hope moving it towards Planning Processes. We will keep people informed through the  PCC and FTC websites and in Framfare and other publications.

We will keep current users informed during the planning and redevelopment. We are finalising arrangements with East Suffolk Council on their funding towards the project.

We will honour our commitment to keep people informed and thanks to those who have volunteered to help or to make a donation. We will follow up on those offers of help and there will be general information sent to everybody during the spring.

The positive affirmation at the Exhibition and the concerns expressed both encourage and help us to proceed. The plans are still available to be viewed in St Michael’s Church. We welcome further comments (please send to framparish@gmail.com or put through the letterbox on St Michael’s Rooms)

St Michael’s Community Rooms project: Exhibition of plans for St Michael’s Community Rooms Thank you to everyone who came to the exhibition; we had a good number of visitors, and useful responses which we are working through.  February will see us considering what was said and meeting with the Architects Quantity Surveyor and Structural Engineer to work out the plans which we would like to send as the Planning Application during the Spring. The Fund Raising Group has been meeting and is planning a Ceilidh and a Singalongathon for the summer - more about those in the March newsletter.

The Church Council (PCC) with the original Working Group made up of local people have been looking at updated plans. There is an ambitious list of projects we would love to see the space used for; from private functions through to luncheon clubs, social opportunities for all ages, societies and meetings, crafts, dance and recreational uses of all sorts. The Church’s use will be a small proportion of the total and most of it would be for similar social and community purposes.

To achieve all this SMCR will provide a hall about the same size as the present SMR. Meetings of about 120 people or around 90 seated at tables will be possible according to the architect. There will also be a meeting room for 20 people. The plans include good access, kitchen and toilets and plenty of storage.

Since the November TC meeting the PCC has progressed the following:-

We are delighted to be able to announce that there will be a public exhibition which will be open on FRIDAY 17th January 7-8pm and  Saturday January 18th from 9.00-12.30 in the present St Michael’s Rooms. We’re hoping as many people as possible will come (we hope refreshments will be served throughout) to take a look, share perceptions, express concerns (any plan can be improved, but all have to include compromises) and learn what will be happening next.

The plan is to provide a hall and a smaller room with storage and good facilities for the whole community.

This was passed unanimously as was the second motion:

The way things have turned out much of the responsibility and risk will be carried by the PCC (Church Council) but they are clear that this is a Town Project for the whole community and is there to benefit all the residents as is right and proper in the use of CIL (Community Infrastructure Levy). If you are interested in being involved with the new St Michael’s Community Rooms do email revmarksanders@tiscali.co.uk .

There is still a lot to be done. The hope is to gather an interested group together, to be in touch again with those who live nearby and to have a public exhibition in the New Year and then to move on to planning processes which will take some time.

St Michael’s Rooms will continue to serve the community in the mean time - if you wish to use them do contact the Parish Office framparish@gmail.com 01728 621255. 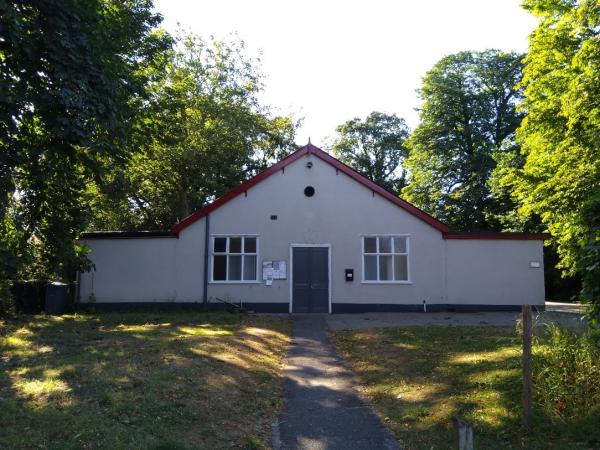