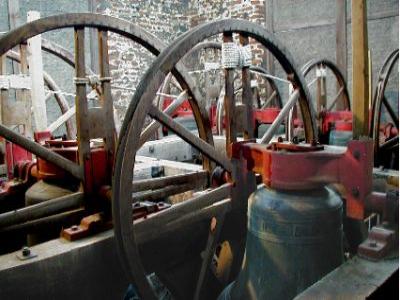 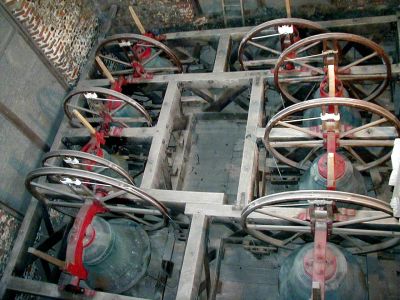 St Michael's has 8 bells located in the bell chamber near the top of the 98 feet tall tower. The earliest two, the fourth and fifth bells, date from the mid 15th Century and are part of a ring of five and a Sanctus bell which were recorded to be in existence in 1553. Others were subsequently added, the tenor re-cast and the octave was completed in 1718. Framlingham was the second or third ring of eight in Suffolk, the first at Horham in 1672-1673 with both Framlingham and Bungay following in 1718. The ring is in the key of E.

Bell ringing is an act of worship and, as such, the bells are rung at St Michael's each Sunday prior to the 9:30 Eucharist. They are also rung to mark other special occasions such as weddings. Practice takes place normally every Tuesday evening from around 7:45pm until 9:00pm and visiting ringers are most welcome to join in.

In 1892 the bells were re-hung in their present wooden frame by Days of Eye and remained serviceable until they were re-furbished and re-hung in 1990. The work undertaken on that occasion by Taylor's foundry at Loughborough was to re-tune the eight and re-hang them using new cast iron headstocks, rope, wheels, clappers, and self-aligning roller bearings. The frame was also strengthened using vertical tie rods. The overall result is that the bells are much easier to ring and are noticeably more tuneful. 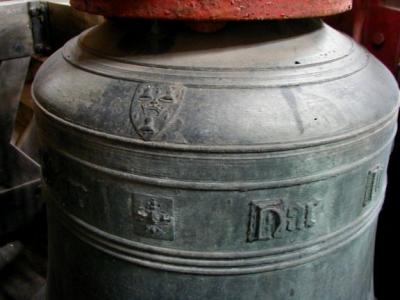 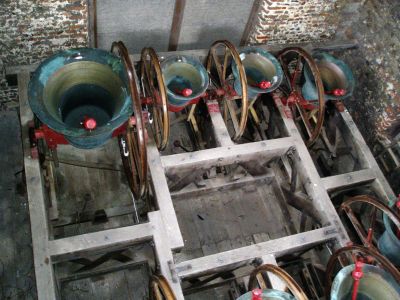 The bells have their own characteristics and were cast by several different foundries. Each carries an inscription. Of note is the trade mark of Brasyers on the fifth bell. This and other details of each bell are as follows:

Second Again cast by John Stevens in 1718, this bell is 29 inches in diameter and weighs in at 5 cwt. Its inscription is "Prosperity to all my benefactors : John Stevens : Facet : 1718:".

Third The third was re-cast by John Stevens in 1720, measures 31 inches in diameter and weighs 6cwt. Its inscription is similar to the treble's: "John Stevens made mee 1720".

Fourth One of the two oldest bells in the tower, the fourth bell was cast by Brasyers of Norwich between 1423 and 1513. It has a diameter of 32 inches and weighs just over 6cwt. The inscription, in Latin translates as "In this chamber, Gabriel now sounds sweetly".

Fifth The fifth is the other oldest bell in the tower, also cast by Brasyers between 1423 and 1513. This has a diameter of 34 inches and weighs 8 cwt. Its Latin inscription says "I am called the bell of the glorious Virgin Mary". 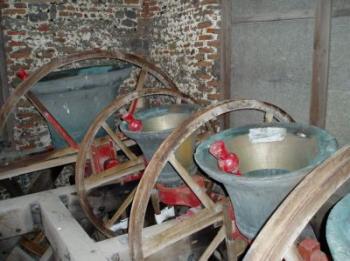 Sixth Cast in 1583 by William Brend of Norwich, the sixth measures 37 inches across and weighs 9 cwt. Its inscription, again in Latin, says "Let every sound praise the Lord".

Seventh This bell was cast in 1622 by William and John Brend of Norwich and is 42 inches in diameter. It weighs 11 cwt and carries the simple inscription "Anno Domini 1622 WIB"

Tenor This is the heaviest and youngest bell in the tower. Originally made in 1618 it was re-cast in 1902 by Mears and Stainbank's Whitechapel Bell Foundry. It is 47 inches in diameter and weighs just over 16 cwt. Its inscription is "1718 recast 1902 Long live King Edward 7th"

The Ellacombe Apparatus has been removed from the groundfloor and re-assembled in the ringing chamber. This is because of the construction of toilets and a mezzanine floor to accommodate a choir vestry.