The Church of Saint Michael Framlingham has been built, rebuilt and added to down the ages. A surviving feature, the capitals of the Chancel arch, date from the twelfth century but the majority of the church was built in the perpendicular style between 1350 and 1555. The roof is especially glorious with intricate fan tracery which conceal hammer beams. The roof itself dates from about 1521.

The font is earlier, dating from the fifteenth century and is an excellent example of a typical East Anglian font of that period.

Opposite the porch door, on the north wall of the nave, is a wall painting which is believed to have been painted in about 1400 and which was rediscovered under plaster in 1890. 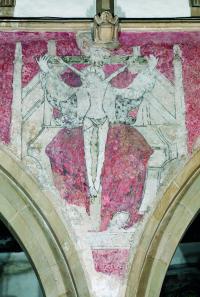 The focal point of the church is the high altar with the reredos containing a mystical painting -
"The Glory" representing the image of God. It dates from the first quarter of the 18th century but the name of the artist is still unknown. The letters IHS signify the name of Jesus.

Framlingham was a major seat of the Earls and Dukes of Norfolk. Vast estates of the Norman Bigods were forfeited to Edward I and Framlingham came to Thomas of Brotherton, eldest son of Edward and Margaret of France. After many other changes of inheritance, in about 1635 Sir Robert Hitcham bequeathed the Framlingham estate to Pembroke College Cambridge who remain Lords of the Manor to this day. The church contains many fine tombs including that of Thomas Howard, 3rd Duke of Norfolk.

Hanging high up on the south wall of the chancel is the funerary helm of the second Howard Duke of Norfolk. In 1513 he led Henry’s troops to victory against the Scots at Flodden. After his death he lay in state in the chapel of Framlingham Castle for a month before his funeral at Thetford. There the helm was carried by Windsor Herald. The original helmet of about 1500 had been altered, with the chin guard and visor riveted into a funerary helm. Note the lion crest denoting that the family was of royal descent.

Over the south door hangs a modern hatchment which commemorates the fallen of the 390th Bombardment Group of the USAAF which was stationed in World War II at RAF Framlingham (Parham) from 1943 until 1945. In that time the 390th flew 301 combat missions and lost 176 aircraft. The hatchment is based on the original crest of the 390th and was unveiled and dedicated on 7th May 1994.

On the south aisle wall hangs the royal coat of arms which is dated 1661 and commemorates the restoration to the throne of Charles II. It contains three sets of initials: R G of the returning Rector Richard Golty, and the churchwardens C N, Christopher Newgate, and N B, Nicholas Browne. 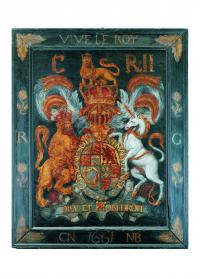 Framlingham PCC offers conducted tours of this splendid church, which is a treasure house that well repays a visit especially when lead by knowledgeable guides. They bring to life the history of the building itself and its various stages of construction over the past 600 years. Visitors will hear about the fascinating and risk laden lives of members of the Howard family through the Tudor period. The Howard tombs are magnificent.

Visitors will also see the major contribution to the church by leading members of the Arts and Crafts Movement.

There will be recordings of music played on the world famous Thomas Thamar organ.

The tours last approximately one hour for a small charge and parties of between 10 and 40 are welcomed. Guides use a microphone for larger parties and there is a loop system.